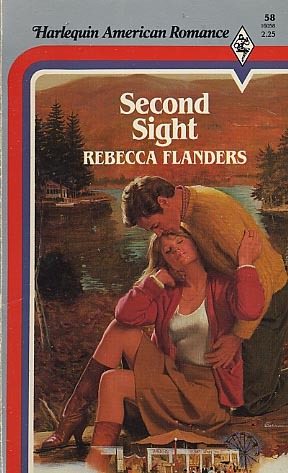 I don’t know how I feel about Adam’s mustard-colored sweater, but I’m loving Jennifer’s boots! 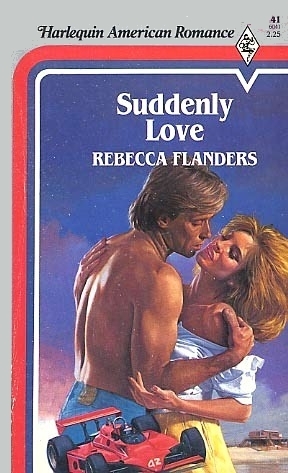 Easily one of the worst early-1980s Harlequin American Romance covers, a feat not to be dismissed.

My guilty pleasure is vintage category romances, but the experience is often like Forrest Gump’s box of chocolates: for every melt-in-your-mouth truffle, you get three of those nasty nougat-y things that hurt your teeth and make you swear off Russell Stover for the duration. When you find an author like Rebecca Flanders, however, it’s like someone traded your Russell Stover box for a cute little bag of those Lindor Truffles — every one’s a winner.

I discovered Rebecca Flanders’ Harlequin backlist by way of Second Sight, which I found by Googling romance novels with librarian heroines (it’s for a project I’m working on — I have a great job 😉 ). One thing led to another, as it usually does with me and books, and within days (okay, hours) of finishing Second Sight, I’d also polished off Suddenly Love.

Here are the synopses:

She gave him two gifts: her love and second sight

Normally, Jennifer Kiel was the head librarian in the town of Southworth, Massachusetts, but on that bright autumn day Jennifer had donned cape and veil, transforming herself into Madame Voltaire, the fortune-teller of Southworth’s annual fair. Somehow, Adam Wilson found his way to Madame Voltaire’s tent-and two lives were changed forever.

For Jennifer, who suffered a “condition,” who’d led a quiet life in which very little was allowed to happen, Adam was an unexpected gift. And for Adam, who’d been running away from himself, trying to outdistance time, Jennifer was the miracle he’d never thought he would find….

Her life was routine until suddenly love…

In the time it took to sneeze, Beth Greene hit him.

As he slumped over the hood of her car, she feared the worst, but the man insisted he was uninjured. Nevertheless, Beth drove him to her store, Greene Drugs, to administer first aid to a nasty scrape on his leg. It was then she discovered whom she’d hit: Corey Fletcher, the million-dollar face. Successful businessman, model, actor, racing car driver. Why was this jet-setter jogging down the peaceful streets of Virginia Beach? And worse, why did he keep returning?

If these synopses have you gritting your teeth against the unbearable sugary-ness, remember what I said about Russell Stover versus Lindor Truffles — like the best chocolates, Second Sight and Suddenly Love have that little bit of bite that keeps them from being cloyingly sweet.

Second Sight really surprised me.  Jennifer and Adam may have the meet-cute for the ages, and there is an element of insta-love at work here, but as the story progresses and you get to know both characters better, both the meet-cute and the insta-love make sense, and the depiction of love in a small town where everyone knows everyone else’s business is revealed for the double-edged sword it often is.

And, oh, these two crazy kids — Jennifer is a librarian, which gives her the winning combination of wisdom untold and utter unflappability, and Adam is a photojournalist who’s covered everything from war to soft-core porn. They fall in love (sorta) at the fair, but they really bond over a book, one that becomes important to the book’s secondary plot — an intellectual freedom battle in Jennifer’s library. The book (not a real book), The Tale of Elias Cotton, has “incest, rape, murder and explicit perversion… that precede Elias’s discovery of his own latent homosexuality” and naturally goes over like the proverbial turd in the punch bowl in tiny Southworth. Half the town, including Jennifer’s overprotective sister and brother-in-law, want to burn the book and fire Jennifer one after the other, and there’s a rousing scene in which Jennifer uses Shakespeare and the Bible as examples of works with similar content as The Tale of Elias Cotton.

Oh, and there’s a love story, too. A very bittersweet love story, as both of  these characters have Big Secrets that I can’t give away without venturing into spoiler territory. Read it and weep, literally.

I knew after reading Second Sight that I had to read more Rebecca Flanders to know whether she was really as good as I thought. I chose Suddenly Love because it, too, works into an interest of mine — car racing as depicted in romance novels (I have theories about this like you wouldn’t believe. You’d think I was writing a master’s thesis).

Beth and Corey have a meet-cute that is even funnier than Jennifer and Adam’s. She’s suffering from a dilly of a cold, and hits him with her car while sneezing, then gets high on antihistamines and acts like a fool.

Beth is one of my all-time favorite small-town heroines, what with her almost-fiance who won’t commit, her bratty juvenile delinquent teenage nephew, and her dedication to her career as the owner of the only drugstore still selling ice-cream cones for a nickel. She’s happy with her life, and though she acknowledges her attraction to Corey from the get go, she’s not sure if she wants the disruption.

I was ready to dislike Corey early on. Flanders makes a near-misstep by making Corey too much. He’s an actor, a shill for a deodorant (actually, that part’s funny), and a genius in addition to being a racing driver. Thankfully, Flanders herself seems to lose interest in the acting and modeling, mentioning them only intermittently as the book progresses, focusing more on his racing career.

And Corey is plenty larger than life as a racing driver. He wears bizarre clothing and often goes barefoot (more on that later). He shows up at Beth’s church in his bizarre clothing, much to her horror. He drunk dials and sends tacky flower arrangements. And he is adorable, and obviously crazy about Beth. You never get in Corey’s head — this is, after all, an early 1980s Harlequin — but the reader often knows better than Beth what Corey’s thinking.

“I don’t think you’re capable of talking seriously,” Beth tells Corey at one point. But by this time, the reader already knows that he always calls her Elizabeth when he’s serious.

Beth’s big problem is his lifestyle, of course. One of the funniest parts of the book is when Corey tricks her into going to a racetrack to test a car with him. She’s disgusted by the racing groupies and the party atmosphere, where “a man with a shoulder-length braid asked her to go to bed with him. Just like that. She refused politely…” Okay, maybe you need to read the whole scene, but it’s funny.

Like Second Sight, the tone of Suddenly Love turns bittersweet as Beth and Corey try to fit each other into their very different lives. I will not spoil the story by going into the details, but the last three-quarters of the book will have you tearing up.

What elevates both these books above the usual vintage (or new) contemporary is Flanders’ writing. She tends to get a little purple in the love scenes (both books have several) but otherwise, her prose and dialogue are among the best I’ve read in category romance.  In a wonderful scene in Second Sight, Adam is telling Jennifer about his progression from  a news photographer in Vietnam and to a photographer of Playboy-style centerfolds, expressing his revulsion for both assignments.

[Jennifer] said quietly, “are you as bitter as you sound?”

He refused to meet her eyes for a moment. “I hope not,” he said softly. And then, looking at her honestly, he added, “I try not to be.”

This exchange comes at a pivotal time in the development of their relationship, and tells so much about both characters.

That brings me to another point about what raises Flanders’ writing above other contemporaries — her heroes and heroines have lives outside of each other, and real careers. As a librarian and former newspaper reporter myself, I appreciated the very real, if dated, information Flanders gives about Jennifer and Adam’s careers. As for Beth and Corey, Beth’s job as a pharmacist and small business owner are so true to life, and also, surprisingly enough, is Corey’s career as a racing driver. Yes, you see the parties and the groupies, but you also see Corey at the tedious, smelly work of testing a car, and see him jet-lagged from a career that literally takes place on almost every continent.

Second Sight and Suddenly Love are such an improvement over the usual Harlequin American Romance small town romances because Flanders really gives you a feel for the settings. Most of the small town Harlequins I’ve read fall into two categories: the ones where the small town serves as a cardboard background, or worse, the ones peopled with characters who seem to have no life outside of playing matchmaker to the heroine and/or hero. Suddenly Love’s Virginia Beach comes more alive as a town, but Second Sight nails the feel of a small town better — gossip abounds, everyone knows everyone else, and doctors still make house calls.

I give Second Sight 5 puppy-dog kisses. I give Suddenly Love 5 blowsy roses, and Corey 5 ugly printed shirts. YOU should give these two books a try!

First, both books are very dated. From Jennifer’s stamping books and using card catalogs to Beth’s telegrams and Princess Diana hairdo, they are rooted in the very early 1980s. Personally, this is one of the things I love most about pre-1990s contemporaries; they are time capsules, in a sense, and reading them is more like reading historicals.

Second, but related — remember Corey’s awful wardrobe and predilection for wandering around barefoot? I am 99.9 percent certain that Corey is based upon a very popular Formula One racing driver of the 1970s, James Hunt. His physical description is very similar to James Hunt’s, as is his cheeky demeanor. To wit:

Hunt was also known for showing up at a racing banquet barefoot, and for wearing a patch on his racing coveralls that read “Sex: The Breakfast of Champions.” Just for informative purposes, Corey is the third racing driver romance novel hero I’ve come across who seems to owe a debt to James Hunt. Hunt, who died in 1993, was as large a personality in life as any of his fictional counterparts. He would have appreciated the gesture.

Heart in Hiding by Emma Richmond

Beyond All Reason by Judith Duncan

Full of sound and fury, signifying nothing.