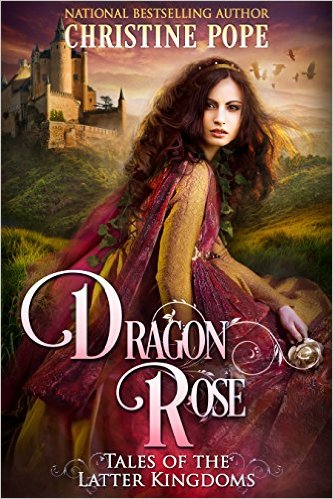 It’s nothing groundbreaking, but I like this cover for Dragon Rose.

The shadow of the cursed Dragon Lord has hung over the town of Lirinsholme for centuries, and no one ever knows when the Dragon will claim his next doomed Bride. Rhianne Menyon has dreams of being a painter, but her world changes forever when a single moment of sacrifice brings her to Black’s Keep as the Dragon’s latest Bride. As she attempts to adjust to her new life — and to know something of the monster who is now her husband — she begins to see that the curse is far crueler than she first believed. Unraveling the mystery of what happened to the Dragon’s Brides is only the beginning….

Some days, all you want from a book is pure escapism. Such as I was, when I chose to spend my evening with Christina Pope’s Dragon’s Rose.

First, let’s talk about all the things Dragon’s Rose is not:

Now, for what Dragon’s Rose is:

It appears that Dragon’s Rose is part of the Tales of Latter Kingdoms series. I have read none of the rest of the series, and did not even realize Dragon’s Rose was part of a series.

Dragon’s Rose gets three chiaroscuro treatments of rose gardens. Rhianne gets three canvases someone else stretched, bless her heart. The Dragon gets three cloaks without hoods, for he needs them.