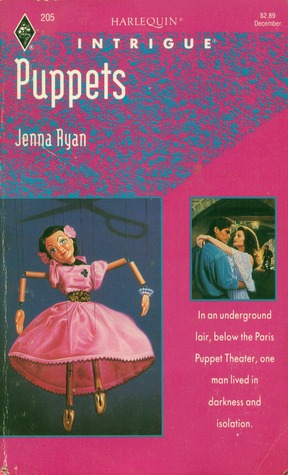 I hope that when you read that cover blurb, you hear it in the voice of that guy who does all the voiceovers for movie trailers…

If you still haven’t checked out Open Library, what in the world are you waiting for, honeybun? A treasure trove of books both new and old are just waiting there for you! You can read them in a browser, on your tablet/smartphone/clay tablet-smartphone or on your (Adobe Digital Editions-equipped) ereader. FREE.

I love Open Library for its mind-boggling selection of long out-of-print paperbacks. You truly wouldn’t believe the number of old Harlequins, Silhouettes and Signets available. I’ve whittled my infamous Amazon Wish List down by hundreds, no kidding.

Which brings us to today’s find, Jenna Ryan’s Puppets.  How I came across this gem is a story in and of itself: I had a vague recollection of being stuck in a rented vacation house once and reading a Harlequin with a hero and heroine who meet in a Jim Henson’s Workshop-like  puppet factory setting. Turns out that Puppets is not that book, but when I read this description, I was sold, anyway:

Hiding behind the gothic columns of the famed Paris Puppet Theater, Raul Sennett watched her. Katarina Lacroix was a vision of beauty and perfection as she performed onstage, mesmerizing the audience as a human puppet. He didn’t know how much longer he could wait to touch her, to be with her.

Returning to his underground lair beneath the century-old theater, Raul cursed the dank vaults where he lived. The world of darkness and isolation had become his home, hiding him from the world above.

In the shadows, secrets lurked — secrets that were the key to his freedom. And only one woman — Katarina Lacroix — could unlock the demons that were buried there. For Raul, they had to be unleashed. No matter what.

Just in case you’re laboring under the illusion that this book is not batshit crazy, have a look at these helpful inserts at the beginning of the book (all apologies for quality — it’s hard to extract these from Open Library):

When you need a map to a boarded-up room, a vault and a hiding place, plus fair warning that you’ll meet characters with bizarre obsessions, deadly jobs, and unnatural fascinations, you know you’re headed for nuclear-level insanity. I don’t know about you, but I’m pretty excited right about now.

No, really. I’ve actually read several Jenna Ryan books, and have never been less than entertained. It’s almost as though she sets out to write the craziest books ever, and yet she has just enough talent to keep you from howling the whole time. She’s Anne Stuart-lite — seriously bizarre settings/plots, but without the genuine air of menace that Stuart usually delivers.

I will be checking back in with a review, so sit tight…