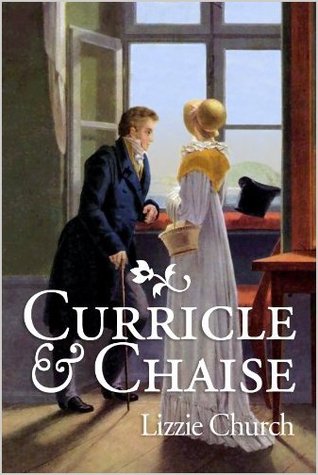 Curricle & Chaise by Lizzie Church
My rating: 3 of 5 stars

…Of course, it was entirely natural that two young ladies of 19 and 7 would feel bereft at the loss of their mama, but to Miss Lydia and Miss Susan Barrington their change in circumstances demanded a total and somewhat painful adjustment to their whole way of life…
…It is 1810. Lydia, now penniless, is forced to seek a home with an aunt and uncle who have no interest in her whatsoever. But there are plenty of others with an interest in her – including the handsome but selfish son of the family – her cousin Charles – and two elegant brothers who live nearby.
Each, in his own way, poses an intriguing challenge to her. Luckily Lydia is well able to look after herself but she gets into a number of scrapes which almost cost her any chance of happiness before finally managing to sort things out in the end…

Fans of Regency romances and Jane Austen alike will appreciate the author’s effort, if not the actual execution.

Like the traditional Regency romance, “Curricle & Chaise” features a warm romance that’s a pull and tug for most of the book. Like a Jane Austen book, the story features a large ensemble cast and continuous play on the manners of the Regency period.

However, the book is neither fish nor fowl as far as Regency or Jane Austen clone goes. Although the language is spot-on for an Austen-alike, as is the soliloquy-and-dialogue-heavy structure, the story itself too light and frothy to mimic the insight of Austen. As a Regency, it falls flat, with little to no action to move the story along  — it reveals itself almost painfully as a self-published title during the middle section, which could have used some judicious editing.

Still, the book’s a pleasant, if unmemorable read for those who enjoy period-correct Regency-set historicals.

View all my reviews