Whistle for the Crows by Dorothy Eden

One of the very best things about e-books is the reissue of out-of-print and hard-to-find paperbacks.  Whistle For the Crows, Dorothy Eden’s 1962 contemporary Gothic, is a recent e-book reissue from Open Road Media, an e-book publisher that has brought many genre paperbacks back from obscurity.

For Cathleen Lamb, traveling to Dublin to record the history of the mystery-shrouded O’Riordan family is the answer to a prayer. Still grieving over the accident that killed her husband and baby daughter, she hopes to lose herself in other people’s lives.

But something sinister is going on at the ancient castle at the edge of the moors … something beyond the scandalous skeletons rattling around the O’Riordans’ closets. The former heir was killed three years earlier in a suspicious fall. The same night, the family matriarch suffered a stroke that left her mute.

Despite the malice that surrounds her, Cathleen is drawn to the brooding, darkly passionate man who is plotting to control the family. But even he may not be able to protect her when the crimes of the past reach into the present to terrorize the living.

Whistle For the Crows will please readers who love this particular style of 1960s-era Gothic featuring a vague, slightly dense heroine, a number of brooding/menacing/disenchanted potential heroes, and mysteries that are not so much mysteries as big misunderstandings. A few of the other boilerplate Gothic elements appear as well, including the dreadfully scary house and the huge family with even bigger secrets. Throw in old stand-bys like mysterious cries in the night, suspicious goings-on in the village and certifiably insane family members, and you’ve got a recipe for a classic mid-century Gothic.

Although Eden’s writing is not as imaginative or evocative as contemporary Gothic grand dame Mary Stewart’s, the modern reader will find it goes down much easier than the stilted, dense prose that plagued so many mid-century Gothics. Eden has a charming voice, and if Whistle For the Crows’  plot is a little overcooked, it did keep me reading — and guessing.

All in all, I give Whistle For the Crows four out of five mysterious cries in the night, and just for fun, threw in three vintage covers in addition to the new one! 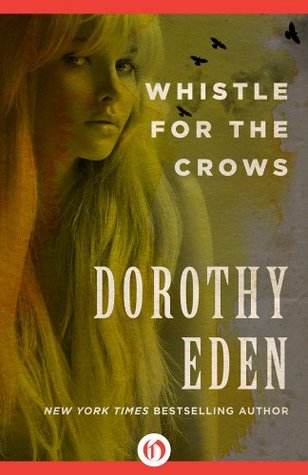 Whistle For the Crows